Give More Than “Thanks” This Thanksgiving 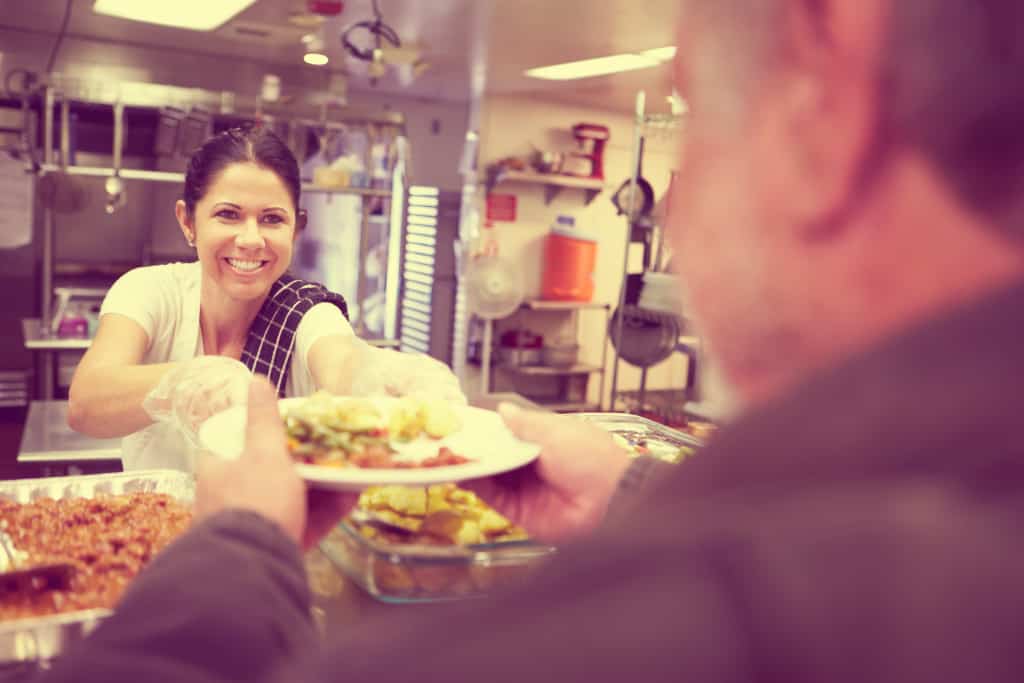 As we all look forward to Thanksgiving next week, I know many families have turned their hearts towards recognizing the blessings in their lives this month — and I love that. Working on being grateful and on opening our eyes and our hearts towards seeing God’s goodness in each day is an incredible way to grow in the type of joy that all Christians are called to exude.

But let’s not forget what we’re called to practice after gratitude, which is: generosity.

When you start to recognize every good and true and beautiful thing as a gift from God, you start to realize how undeserving you are of all of it… and you start to realize that nothing you own truly is yours — but His, and that He gave it to you freely, and you now have an opportunity to give it back to Him by giving it to those around you, those in need.

In other words, let’s not stop at being grateful this Thanksgiving for what we have, but also remember to give, most especially if we have more than we need.

Before my husband and I were married, we went on a retreat together as a part of our marriage prep in our diocese. While we were there, married couples – some married just a few years, others for more than 20 years – gave talks about their experiences in marriage; they talked about having children, dealing with in-laws, communicating about expectations, future plans, and finances.

I’ve heard it said before that one of the top reasons for divorce is arguments about money. So while we were on the Engaged Encounter retreat, it was no surprise that an entire talk and discussion period was dedicated to focusing on financial fidelity; being open with your future spouse about your finances – how you spent your money in the past, how you’re spending it today and how you’ll spend it in the future.

No problem there! I knew my husband (then-fiance) wasn’t a big spender at all; he was a big saver. When he did spend money, it was to buy something second-hand. I don’t think one thing in his apartment when we were dating was something he had ever bought brand new.

So he wasn’t a big spender at all, but he was (and still is) a big giver.

Since I’ve known him, he’s always been incredibly generous with his money. This was something I didn’t completely understand when I first started dating him.

We wouldn’t go out on fancy dates, we didn’t exchange expensive gifts, and when we shopped together – if we went shopping, it would be at garage and estate sales, his favorites.

But when it came to going to mass together on Sunday, when the collection basket made its way down our pew, my husband would put more money in that basket than I saw him spend all week.

I didn’t say anything about this for a long time, because we were dating and it was his money to spend. But once we were engaged, and then married, and discussing how his & mine would become ours, tithing was one topic we talked about a lot.

Neither of us were making very much money — but we weren’t struggling to get by either, as long as we were smart about how we were spending our money. So when I started to think about and add up all that money going in the collection basket each Sunday, I thought we were being a little too generous. I wanted to keep more of what we made — we worked hard to earn it.

So I mentioned this to my husband at one point, and he said he actually thought we could afford to be even more generous – “now that you mention it.” 😉

My husband’s continued generosity, even when I wanted to be stingy, taught me a little bit about providence, about faith, and about my personal relationship with God and all His people.

I was listening to a homily by Father Barron about a year ago, and he was talking about social justice in the Catholic Church. He talked about money and property, and his reflection reminded me of how much my idea of how we spend our money  — or rather, how we give away our money, has changed these past few years.

Father Barron mentioned this quote, by Pope Leo XIII. He said, “Once the demands of necessity and propriety have been met, the rest that one owns belongs to the poor.”

Father Barron mentioned St. Ambrose, too, who said if a man has two shirts in his closet, one belongs to him — the other belongs to the man who has no shirt.

Essentially, once we have what we need, the rest is something we should be giving to the people in need.

This is a beautiful message, but certainly something that’s hard to hear in today’s culture. This also is something my husband knew before I knew it… but now I know it well, and it’s something we’re continuously working on in our lives.

I’ve come around to see our money as something that doesn’t exist just to benefit our family, just the two of us. No. It’ something more than that; something to benefit others as well. And my husband and I? We are simply stewards of that money.

That was a good message for me to hear, a check-up — a moment to think about our finances and how we spend, and give, our money. I think this question is something we can ask ourselves periodically — are we using our land, our home, our investments to help others? Or are we keeping those things to ourselves, only to benefit our family?

I wrote about this sentiment a few weeks ago; I was reflecting on how to be a hospitable host, and I realized that opening the doors to your home (and your heart) was all that was needed. I’m very fortunate to have a home, a roof over our head, a table in our dining room… and that table has a lot more space around it than just the two of us can fill. So I see that as an opportunity from God; to invite someone in, to feed someone who is hungry — even if that is just another family member or a friend.

St. Isidore the Farmer comes to mind here. He lived in Madrid, Spain, in the tenth century, as a farmhand on a wealthy farmer’s land. He was known for his love of the poor, and his great devotion to God; attending daily Mass before going to work, and being in communion with God all day throughout his work — constantly praying. And after work? He would walk home, and invite the poor and homeless he met along the way to come to dinner in his home. And his wife, Maria (who is also a saint!) would always have cooked enough to share with those who came home with Isidore; not because there was plenty to share, but because there was generosity of spirit here… and God provided.

It’s taken me a while to come around to realizing that it’s not about giving what we don’t have, or giving so much that we’re left with nothing. There has to be a balance in our lives between frugality and charity.

Ellyn von Huben, a writer at Oblique House,  wrote a piece for Word on Fire ministries, and she said, “The balancing of frugality and charity is something that needs to be modeled in every Christian family. Frugality for its own sake makes one stingy and can lead to a lack of charity. But husbanding one’s resources with care and living in simplicity allows us to share these resources more fully with others.”

The more we give, the more we receive in our own lives. By giving more, I was worried that we would be left with little to nothing; but God has provided.

This doesn’t only apply to money. It also applies in our relationship with God — what we give to Him, He gives back to us ten-fold.  His generosity is the only one that cannot be outdone. Ours? We can keep trying.

It’s never too late to think about giving a little bit more, even if it makes you uncomfortable at first. Coming from experience, feeling uncomfortable usually means we’re growing.

Besides, it’s a proven fact that the happiest people are generous people.

Don’t get me wrong — this is certainly not something we’ve perfected. I still struggle with it. But I’ve seen the value in tithing, in giving, and it’s something I’m hoping my husband and I can continue to learn how to do it well.

A good reminder for me is to remember the story of the poor widow in Mark (12:41) who put what little money she had into the offering. Jesus said to his disciples, “Truly I tell you, this poor widow has put in more than all those who are contributing to the treasury. For all of them have contributed out of their abundance; but she out of her poverty has put in everything she had, all she had to live on.”

And an even more recent reminder from Pope Francis came just this past weekend when he spoke about what Jesus would ask us on our Judgment Day.

He said, “What will the Lord ask us on that day? Did you go to Mass? Have you prepared a good catechesis?” No, instead, Pope Francis said, the deeper questions will be, “on the poor. Because poverty is the center of the Gospel. He, being rich, was made poor in order to enrich us with his poverty.” He went on to say that Jesus didn’t consider it a privilege to be God, but instead, “humbled himself unto death, death on a cross. It’s the choice of service… (And that’s the choice we will be faced with when we meet Jesus face to face): did you use your life for yourself or to serve? To defend yourself from others with walls, or to welcome with love? This will be the final decision of Jesus.”

Let’s remember the example of the widow, and the words of Pope Francis and Pope Leo XIII, as well as those of St. Thomas Aquinas and St. Ambrose, and let’s examine what we have — and once we meet our own needs, let’s give to those in need. And let’s pray that when we’re needy, the more fortunate will do the same.