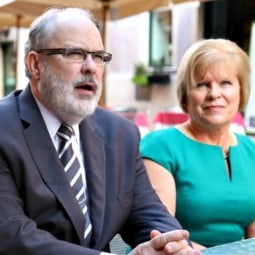 How did you come around to learning and accepting the Church’s teaching on contraception? I’m curious!

I don’t remember learning anything about it in C.C.D. growing up, and not even in R.C.I.A. — which I went through while I was in high school.

The first time I remember hearing anything substantial about it was while I was in college and living in a Catholic dorm. Before then, I think I may have heard a “joke” or two before about big, Catholic families (“Do they know where babies come from?” and, “Guess NFP doesn’t work… they have 5 kids!”).

Here’s a piece over at the National Catholic Register, about how one of my favorite people, Dr. Hilgers, came around to natural family planning — I’ll give you a hint, it has to do with Bl. Pope Paul VI!

“Together with his wife, Hilgers founded the Pope Paul VI Institute for the Study of Human Reproduction and the National Center for Women’s Health in Omaha, Neb., in 1985 after reading Paul VI’s encyclical Humanae Vitae on the regulation of birth.

“The doctor recalled that he was one of many people who had expected the Church’s position on contraception to change at the time that the encyclical was released. However, he said, upon reading the document, he was “an instant convert, because the things that were being portrayed in the newspapers and television was not what Humanae Vitae was saying…

“There has been a lot of political chatter about the so-called war on women, but they described it as the inability to abort, the inability to get contraceptive measures, and it pretty much stops there, abortion and contraception,” the doctor noted.

“However, he said that the real “war on women” doesn’t come from a lack of access to these “very accessible” products and procedures, but rather from “the result of abortion, contraception and in vitro fertilization,” which can often be physically damaging and emotionally scarring to women.”

You can read more about it here.

Now, tell me — how did you hear about Natural Family Planning, and what convinced you to embrace the Church’s teaching on contraception?