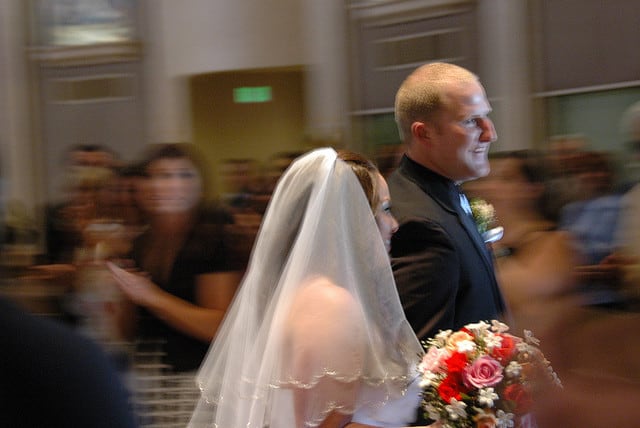 A little more than a month ago, one of my best friends got married. I was honored to be a part of her wedding party and to stand up and witness her & her groom profess their love for one another and their commitment to each other. It was a beautiful day — and a beautiful homily!

I have to say, I was almost (almost!) as emotional about her getting married as I was on the day I got married… I think it’s because these past two years of marriage have truly been transformational, and I knew just a little bit of what would come for my friend after the day she said, “I do.” I knew just a little bit about where she was going, where she & her husband are now going, together…

The priest who celebrated the mass spoke about one of his favorites parts of a wedding during the homily. He said his favorite moment is when, all is said and done, and the newly married couple hold hands and walk down the aisle towards the back of the church — together.

It’s just the perfect moment and symbol of the two starting their new lives together, as one, moving in the same direction.

Pope Francis said something pretty similar last weekend, as he presided over the wedding of about 20 couples in St. Peter’s Basilica.

The Catechism says, “(Christian spouses) have their own special gifts in the People of God. This grace proper to the sacrament of Matrimony is intended to perfect the couple’s love and to strengthen their indissoluble unity. By this grace they “help one another attain holiness in their married life and in welcoming and educating their children.”

Jesus Christ is the source of that grace.

Now, I was thinking about this lately as my husband & I were driving home together one night. He was sitting in the driver’s seat, I was in the passenger seat, and every once in a while, he would extend his hand out to me to hold — just for a few seconds.

And we would sit there, together, moving in the same direction as he drove… And it reminded me of that moment when we both held hands and walked out of the Chapel where we were married. It almost felt like a renewal of that moment — a reminder of our one-ness, of the direction we are moving towards together, and the long road ahead of us (and the long road behind us).

It’s in moments like these that I remember what our marriage is all about: growing in sanctity through this sacrament, moving towards that goal of Heaven each day, together, hand-in-hand.